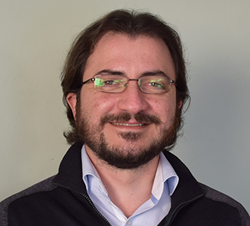 Athos Antoniades received his PhD in Computer Science from the University of Cyprus. He has a 15 year career working in the academia and the pharmaceutical industry on large data sets analytics and medical education. His work involves the development of novel approaches to analyzing high dimensional data sets from large studies.

He has also worked on game-based learning, as he developed Virtual Emergency Telemedicine, a serious game designed to support diagnosis and problem-solving skills of medical students and practicing doctors using virtual patients and a telemedicine platform, in which learners' performance is being tracked in log-files for a detailed analysis of their actions. He has worked on many large projects, some of his key roles, include being the scientific coordinator, Dissemination leader, and WP coordinator inLinked2Safety an EC funded project under the FP7 framework programs.

In the mEducator project funded under the eContent plus program of the EC, he was the WP leader and is leading the Exit and Sustainability of this project that has successfully passed on to its post funding stage. He is the Research director of STREMBLE an R&D company that focuses on Medical analytics and medical education.